Mechanism of action (MOA) of Caffeine

Most people get a temporary increase in wakefulness or better ability to concentrate after caffeine intake.

There are several known mechanisms of action to explain the effects of caffeine. The most prominent is that it reversibly blocks the action of adenosine on its receptor and consequently prevents the onset of drowsiness induced by adenosine. Caffeine also stimulates certain portions of the autonomic nervous system.
Source: Wikipedia

How does caffeine block the adenosine receptors? How does it stimulate the autonomic nervous system?

Caffeine is structurally similar to adenosine. (3) This underlies it ability to bind to the same receptors. 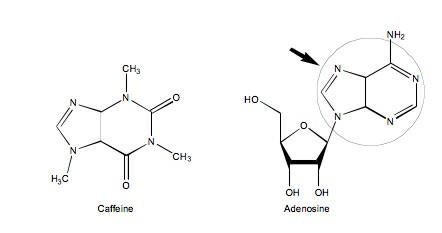 The autonomic effects of caffeine are also mediated through caffeine's activity at the adenosine receptors (2).

Not the answer you're looking for? Browse other questions tagged caffeine nervous-system or ask your own question.

5
Difference between Caffeine high dosages (800mg) and Adderal for ADHD?

11
Alternative to caffeine - same effects, different chemical
5
Can caffeine induce sleepiness instead of wakefulness?
3
Risks of Caffeine Powder
0
Getting rid of caffeine addiction
6
Should people with tachycardia avoid caffeine?
3
How to reduce half-life of caffeine?