What is the pH of La Croix?

Searching around online, there are tons of silly articles about sparkling water, making sweeping statements about how bad they are for your teeth and even the rest of your body, but with no concrete evidence.

Can anyone find and share the actual pH of different flavors of La Croix? I'm particularly interested in lime, lemon, and plain.

Some vendors publish the pH values for the products they sell (examples in this answer). But that seems to be only the case if their product really stands out to the competition with high pH levels. Simple carbonated water (de-ionised) can have quite a low pH but other factors come into play for the acidity of the finished item.

What is the PH balance of LaCroix waters?

The pH level of LaCroix varies by flavor and is less acidic than traditional soft drinks, 100% juice and juice drinks, and other typical beverages without the calories! If there are any concerns about your acidity consumption, please consult your physician.

Dr. Matthew Messina, a dentist and spokesperson for the American Dental Association, told MUNCHIES, a website and digital video channel, that “the health risks of sugarless, naturally carbonated waters like La Croix and Perrier are nowhere near those of sugary sodas, despite their textural similarities. There is no scientific evidence that sparkling waters are any more dangerous or damaging to the teeth than regular water.”

Real answer: "What the hell, we won't tell!"

Of course, the real pH depends not only on the other salts in the water but on what exactly is used for flavouring it. If it is citric acid for example, and all too often it is, then chances for a drink low in acidity dwindle fast.

This Is Why You Should Stop Drinking LaCroix Flavored waters — yes, including La Croix — are eroding your teeth (2017)

It is really a pity and disgrace that "sparkling water" often refers to acidified flavoured sparkling water. Regarding dental health these are quite different.

**Why flavored waters are bad for your teeth ** (2017) Carbonating that (which is adding carbonic acid) lowers its pH to about 5. (Happily, that is well in the tooth-safe zone, so you can go ahead and drink your plain sparkling water without worry.) The trouble starts when flavors are added, and the citric acid commonly used in bottled flavored waters is considered especially insidious because besides lowering pH it also may remove calcium from the teeth. A 2016 report published in the Journal of the American Dental Association found that un-carbonated flavored waters such as grape, lemon or strawberry Dasani had a pH of 3, only somewhat better than RC Cola and Coca-Cola, which were among the most acidic tested, at 2.32 and 2.37 respectively (and which are close to the pH 2.25 of pure lemon juice). On its website, the brand Hint says the pH of its waters range from 3.5 to 4.

Not only single expert opinions support this view. Some studies that support the

Investigation of mineral waters and soft drinks in relation to dental erosion. (2001) 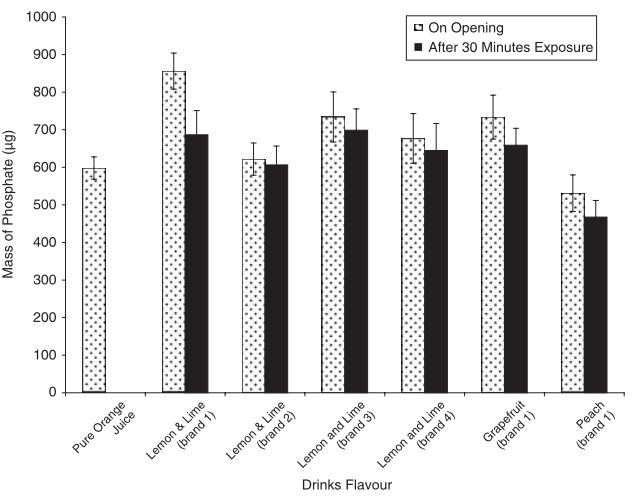 Mean hydroxyapatite dissolution and standard deviation, expressed as the theoretical mass of phosphate (μg) present in 1.5 mL of test solution, both after the immediate opening of the test liquid and after 30 min of exposure of the carbonated water to air. Each value is based on the average of 10 replicate samples.

That has to be put into perspective. Even citric acid is not the devil. The pH is not everything. Amount of drink you consume and exposure time to your teeth are much more meaningful and harder to measure but better controllable than this easy to measure but harder to control number that is pH.

Companies adding needlessly such superfluous ingredients like citric or other acids to "sparkling water" should be held responsible for diluting the meaning of that term and sued if they continue to sell this with a misleading claim like "healthy", since all around these flavoured waters are apparently not tooth friendly. Not drinking them might be one sane option.

Insisting to ingest might warrant the following precautionary measures:

Copied from the Chicago Tribune article:

The company does not release pH levels for its products. Given the question's interest in lime, lemon it is quite reasonable to assume a significant amount of citric acid used or the "flavour". This will bring down the pH-level to significantly lower than real, unflavoured water. If it does not contain citric acid or similar compounds under the label of so-called "flavour" then another indicator is the fact that it does not contain any sodium. The less minerals such a water contains, the more pronounced the resulting pH from the added carbonic acid. Let me be bold and cast an educated guess: the pH level will be well below 4.

For comparison some of these "water" drinks were classified as such:

As long as the company decides to keep silent about the ingredients and the FDA continues to allow them this practice:

What's actually in this stuff? And why is it so incredibly addicting?

Part of the problem is that there's actually no way to know for sure what gives this very subtly flavored drink its ambiguous "essence." Look at a LaCroix can and you'll see it has no artificial sweeteners, no calories, no sodium, no nothing. The only two ingredients are carbonated water and natural flavor, which means almost nothing. Carbonated water is water with CO2 in it. Sure, it creates a little carbonic acid in the drink, which some folks have said could harm your teeth, but so long as you're healthy your saliva easily neutralizes those acids. It's the second ingredient—natural flavor—that holds the key to LaCroix's allure.

According to the FDA, natural flavor can be anything that adds flavor to a product so long as it comes directly from a plant or animal source. That's a pretty wide range, but it's further muddled by the fact that natural flavors can be made up of more than one ingredient—including artificial ingredients that help preserve the flavor or help it mix well with the other ingredients. "You see 'natural flavor' on a label and it's really a black box of secrecy in terms of what's being added to that product," says David Andrews, a chemist from the Environmental Working Group.

Just like their artificial counterparts, natural flavors are complex chemical formulas invented by food companies and a small handful of flavor houses around the world. The FDA lets companies call these formulas natural even if they have synthetic solvents or preservatives because it classifies those filler ingredients as "incidental additives," which usually come in trace amounts and get a pass from ingredient disclosure laws.

Before you start panic-counting the gallons of LaCroix you've consumed in the last two days alone, know that National Beverage, the obscure Florida-based company that owns LaCroix, claims that it doesn't add anything artificial to its flavors. Instead, they use "natural essence oils ... extracted from the named fruit used in each of our LaCroix flavors," a company spokeswoman said in an email.

The skinny on sparkling water: Does it erode teeth?
Is Carbonated Water Bad for Your Teeth? (Has some further measurements on pH levels.)

This research article is maybe useful:

The pH of beverages available to the American consumer https://www.ncbi.nlm.nih.gov/pmc/articles/PMC4808596/

Perrier is a 5.5 pH, albeit unflavored, and the article points out that anything over a 4.0 isn't bad for teeth. LaCroix didn't exist when it was written, so we dig farther.

This one's also interesting, as it shows pH is much higher/less acidic... when carbonated beverages are warm: https://www.mcgill.ca/oss/article/health-and-nutrition-quackery/carbonated-water-bad-your-teeth

Here's someone directly testing LaCroix and getting a ~6 pH, which seems impossible... unless they add buffering agents to raise the pH, which is also possible.

Here's someone with a much more accurate test method... at 3.8, which makes more sense. They measured the grapefruit flavor, and I have bets about the temperature.

Yup, it's acidic. And delicious. As a combo of deliciousness and tooth protecting, you might drink it warm.

Not the answer you're looking for? Browse other questions tagged dentistry drinks ph-levels or ask your own question.

6
Why drinking unflavored sparkling water has such an aggressive effect on teeth?