What is the relationship between fluoride and IQ?

Have there been any studies that have investigated the effects of ingesting fluoridated drinking (esp. in high concentrations) on the intelligence (or IQ) of humans or animals?

If so, have any such studies indicated that drinking fluoridated water may have a negative impact on intelligence (or IQ)?

There are over 300 studies have found that fluoride is a neurotoxin (a chemical that can damage the brain).

According to EPA scientists (United States Environmental Protection Agency), there is substantial evidence that fluoride is neurotoxin2009. They based their conclusion on studies showing that fluoride exposure during pregnancy can damage the brain which was consistent with three other studies from China which found that the brain of the human fetus can be significantly damaged by the mother’s high fluoride intake (safe dose for preventing this effect is not yet known). 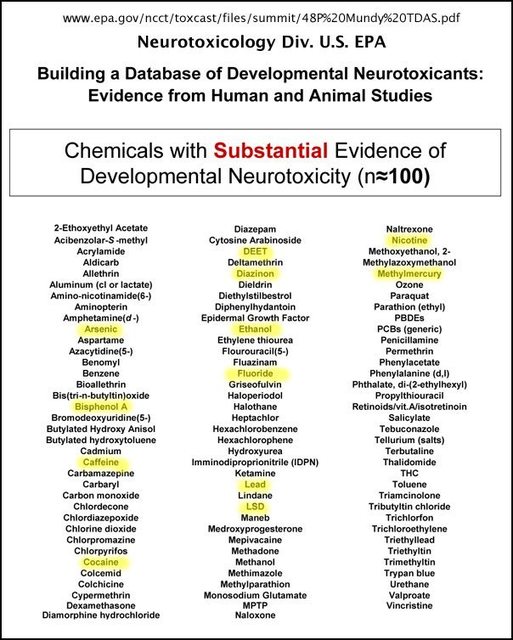 Further more, the National Research Council (NRC) expressed concern about fluoride’s possible contribution to dementia and "it is apparent that fluorides have the ability to interfere with the functions of the brain and the body by direct and indirect means"2006.

It is apparent that fluorides have the ability to interfere with the functions of the brain. (National Research Council, 2006)

A more recent “meta-analysis” of 27 cross-sectional studies performed by Harvard researchers, did a systematic review of children exposed to fluoride in drinking water (mainly from China), which suggested that children in high-fluoride areas had significantly lower IQ scores than those who lived in low-fluoride areas (an average IQ decrement of about seven points in children exposed to higher fluoride concentrations)2012.

Some studies suggested that even slightly increased fluoride exposure could be toxic to the brain.

In March of 2014, The Lancet medical journal published a review of neurobehavioral effects of developmental toxicity, which concluded that fluoride is one of only 11 chemicals that is known to damage the developing brain and it is capable of causing widespread brain disorders such as autism, attention deficit hyperactivity disorder, learning disabilities, and other cognitive impairments. In most cases the damage is often untreatable and permanent2014. According to this, fluoride is classified as dangerous to developing brains.

In a bulletin posted on the Harvard School of Public Health website, Grandjean notes that:

Fluoride seems to fit in with lead, mercury, and other poisons that cause chemical brain drain. The effect of each toxicant may seem small, but the combined damage on a population scale can be serious, especially because the brain power of the next generation is crucial to all of us.

Results on this are mixed. For instance, Reference 1 states that there is no correlation, whereas, Reference 2 states that their results "suggest that the overall IQ of the children exposed to high fluoride levels in drinking water and hence suffering from dental fluorosis were significantly lower than those of the low fluoride area."

I think the New Zealand study explains these finding quite nicely: "Associations between very high fluoride exposure and low IQ reported in previous studies may have been affected by confounding, particularly by urban or rural status."

Due to the sheer amount of mixed findings on this topic, I cannot answer your question with an iota of certainty. I could most certainly give you my opinion, however, it is hardly relevant ;) .

As the saying goes, anything is a poison, it's the dose that matters. Short summary, the new 2015 US PHS standard (0.7 mg/L) or even the old one (0.7-1.2 mg/L) are below the doses at which negative effects were observed in China (2.5-4.1 mg/L), and the evidence from there is not of high quality, even though there's one meta-analysis of it. (As a cautionary tale on inferring from low quality evidence, the first meta-analysis of homeopathy found positive results, latter ones which filtered out low-quality studies were more skeptical.)

But back to fluoride, what did the United States Public Health Service (PHS), actually decide in 2015?

As for neurotoxicity, this was PHS's review of the new evidence:

IQ and other neurological effects. The standard letters and approximately 100 unique responses expressed concern about fluoride's impact on the brain, specifically citing lower IQ in children. Several Chinese studies considered in detail by the NRC review reported lower IQ among children exposed to fluoride in drinking water at mean concentrations of 2.5–4.1 mg/L—several times higher than concentrations recommended for community water fluoridation.[81–83] The NRC found that “the significance of these Chinese studies is uncertain” because important procedural details were omitted, but also stated that findings warranted additional research on the effects of fluoride on intelligence.[6]

Based on animal studies, the NRC committee speculated about potential mechanisms for nervous system changes and called for more research “to clarify the effect of fluoride on brain chemistry and function.” These recommendations should be considered in the context of the NRC review, which limited its conclusions regarding adverse effects to water fluoride concentrations of 2–4 mg/L and did “not address the lower exposures commonly experienced by most U.S. citizens.”[6] A recent meta-analysis of studies conducted in rural China, including those considered by the NRC report, identified an association between high fluoride exposure (i.e., drinking water concentrations ranging up to 11.5 mg/L) and lower IQ scores; study authors noted the low quality of included studies and the inability to rule out other explanations.[84] A subsequent review cited this meta-analysis to support its identification of “raised fluoride concentrations” in drinking water as a developmental neurotoxicant.[85]

A review by SCHER also considered the neurotoxicity of fluoride in water and determined that there was not enough evidence from well-controlled studies to conclude if fluoride in drinking water at concentrations used for community fluoridation might impair the IQ of children. The review also noted that “a biological plausibility for the link between fluoridated water and IQ has not been established.”[79] Findings of a recent prospective study of a birth cohort in New Zealand did not support an association between fluoride exposure, including residence in an area with fluoridated water during early childhood, and IQ measured repeatedly during childhood and at age 38 years.[86]

From the actual New Zealand study we find out they used a simiar standard as the US, albeit slighly lower at 0.7-1 mg/L, and no effect on IQ was noticeable at this level of exposure.

And the stated reason for lowering the PHS standard in 2015 to just 0.7mg/L was based on risk of fluorosis

Although not fully generalizable to the current U.S. context, these findings, along with findings from the 1986–1987 survey of U.S. schoolchildren, suggest that the risk of fluorosis can be reduced and caries prevention maintained toward the lower end (i.e., 0.7 mg/L) of the 1962 PHS recommendations for community water fluoridation.

Recent data do not show a convincing relationship between water intake and outdoor air temperature. Thus, recommendations for water fluoride concentrations that differ based on outdoor temperature are unnecessary.

Not the answer you're looking for? Browse other questions tagged mental-health lasting-effects-duration cognitive-science fluoride iq-intelligence or ask your own question.

9
Any scientific evidence supporting positive effects from listening to binaural beats?
3
Correlation between carbonated drinks and IQ
1
Are there any risks about switching to a non-fluoride toothpaste?
2
Fluoride poisoning by toothpaste