I have been conducting extensive research over the last few years on the history of nudity in social situations, and I am looking to expand my research base now I have come across a few other interesting facts.

Additionally to another question I asked, I am asking...

Dr. David Reed of Florida University has been studying human lice and found that wearing clothes introduced a new form of human lice (the clothing lice). 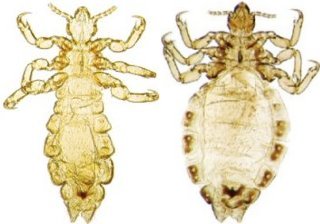 Clothing Lice is a direct descendant of the head louse. The genetic data for this branch of lice would give us a date when humans started to get dressed and the data indicates that our ancestral humans lived naked for at least 2½ million years. Clothing was first used at least 83,000 years ago and possibly as early as 170,000 years ago (Reed, et al., 2011) (Horizon: What's The Problem With Nudity, 2008). If you take the median of these dates that makes it approximately 127,000 years ago.

A bit speculative as this seems to be, given current attitudes in most societies towards nudity, this would be a somewhat promising scenario.

All human infesting lice species are parasites that depend not only on skin contact for nutrition but on certain types of fibres to dwell, to hide, to travel and to procreate. Eradicating this natural habitat on a large scale is very likely too destructive and radical for the lice to adapt quickly enough to such a new situation.

But there is also a problem:

Apes, lice and prehistory (2009)
Head and body lice used to be designated Pediculus capitis and P. corporis but they are now known to belong to the same species, P. humanus x. Fifty years ago Levene and Dobzhansky showed that head lice could be trained or adapted to become the rather larger body lice by attaching them to the body in small pill boxes. More extensive phylogenetic analyses [16,17] indicate that body lice evolved from head lice several times within the worldwide clade A, as they are found in many branches of the cladisitic tree. Multiple derivations of body lice from head lice had already been considered by Zinsser 1, and it makes good sense if one considers that clothing was not a single invention. Wearing animal pelts fur-side next to the skin would have provided a suitable place for lice to breed before fabrics were developed with the inventions of spinning and weaving.

In 17th and 18th century Europe, most of the aristocracy and gentry shaved their hair and wore wigs. Had this custom arisen to protect them from lice as Zinsser suggests? Not according to Samuel Pepys' diary, as he complained more than once about his wig being infested: "Thence to my barbers, to have my periwig cleared of its nits." I wonder if they were head or body lice – is a wig hair or clothing?

Lice and nudity Why naked apes are naked and when we 'lost' our hair has long been disputed, as discussed by Desmond Morris in The Naked Ape. Rantala suggested that nakedness could have had a selective advantage to rid the body of lice and other ectoparasites, a view also championed by Pagel and Bodmer, who added that being seen to be free of lice would be a fitness indicator and a good mating strategy.

These little parasites are highly adaptable and while not that robust in general, the amount of fibre, fabric or hair they need to breed is really minimal.

Shaving can be safer head lice treatment than insecticides (2005)
Sladden and Johnson reviewed common skin infections in children.1 The life cycle of head lice (Pediculosis capitis) was well described and is similar to that of pubic lice. I worked in chronic emergencies in Somalia in 1993 and Sudan 1996-7 among internally displaced populations and in the nomadic Karimajong of Uganda in 1998-9, whose poor hygiene would have been a good breeding ground for head lice. However, head lice were never a clinical problem because these populations know how to interrupt its lifecycle: they shave off their hair, the only place where the eggs (nits) are anchored and glued close to the skin. Lice outside the hair are not transmissible and do not cause infestation.

It is therefore likely that we might be able to not only reduce the lice problem, but to eradicate them completely. But only by going naked and really hairless.

That seems to be the future. Well, a possible one. Prudes then need to find something else to get their pulses up.

Not the answer you're looking for? Browse other questions tagged parasites physical-health or ask your own question.

6
Health Benefit of Social Nudity - Testicular Torsion Prevention?
1
Is it bad for skin to be naked so often?