How does immunosuppressant affect immune system?

I'm talking Immuran (azathioprine) and I would like to know what it does to immune system exactly. I'm not a doctor but I'm asking here just to learn. Does it kill all white cells? Does it reduce the number of white blood cells? Or does it just prevent them from doing their function? What if a virus entered my body?

I will discuss azathioprine here, as there are many different immunosuppressant drugs that work in different ways. The immune system is a complex thing and most will inhibit only one particular aspect of it.

Azathioprine is an immunosuppressant drug. It has been around for a long time but is still widely used. Unlike certain modern drugs that inhibit various inflammatory mediators (like the TNF inhibitors), azathioprine works at the level of DNA to prevent DNA replication (by blocking the construction of DNA from purine building blocks and purine creation) and thus inhibit the proliferation and function of white blood cells (lymphocytes in particular).

Adapted from this paper:

Azathioprine is among the oldest pharmacologic immunosuppressive agents in use today. Over the past 50 years, azathioprine has been used in the treatment of hematologic malignancies, rheumatologic diseases, solid organ transplantation, and inflammatory bowel disease.

The drug is a purine analog, and the accepted mechanism of action is at the level of DNA. Ultimately, azathioprine can then become incorporated into replicating DNA and can also block the pathway of purine synthesis. It is this action that is thought to contribute to its relative specificity to lymphocytes due to their lack of a salvage pathway. However, the effects on the blockade of DNA replication have never fully explained all of the laboratory and clinical findings of azathioprine-induced immunosuppression.

This effect on DNA replication also accounts for some of the potential side effects, such as increased risk of certain cancers, as well as the increased susceptibility to infection shared by all immunosuppressants. That is why infections must be identified and treated quickly in people on drugs like this. Vaccinations for influenza and pneumococcus are also recommended (in the UK).

For anyone who is interested, here are two images showing the chemical structure of azathioprine on the left and purine (which it inhibits through molecular mimicry) on the right. The similarity is evident, though azathioprine is metabolised to 6-mercaptopurine before it has effect. 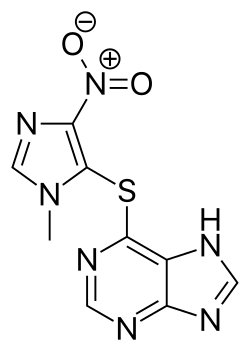 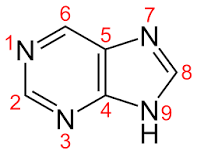 Interestingly, molecular mimicry is often a factor in development of autoimmune disease (for which azathioprine is generally used) and also a way of treating them, as is the case with azathioprine.

I have posted another answer on autoimmune disease which may be of interest.

Not the answer you're looking for? Browse other questions tagged medications immune-system autoimmune-disease immunosuppressant or ask your own question.

5
Knowing the root cause of one's hypothyroidism? How to know if it's Hashimotos Disease?
3
How does interferon beta 1-A help patients with multiple sclerosis?

12
What happens to HIV once it completely destroys the immune system?
3
How does interferon beta 1-A help patients with multiple sclerosis?
2
What makes a person asymptomatic? How does it work?
2
How often does the adaptive immune system "learn" a new pathogen?
3
How can a vaccine prevent an individual from getting a disease but not from transmitting it?
2
Antibodies and Immune system
2
Hyposecretion of cortisol lead to depressed immune system?