What is the mechanism of eczema?

I'm trying to link the signs and symptoms of eczema (especially atopic dermatitis) to its causes. In short, what is the mechanism of the disease?

In an answer of another question about eczema, @anongoodnurse has said (bolded words added by me):

Signs and symptoms: Eczema (or Atopic Dermatitis) is an incompletely understood skin disorder, in which the normal skin barrier function (permeability) is compromised, allowing the skin to dry out more than normal skin.

Causes: The cause of the dryness in AD is thought by some to be (1) a deficiency of a naturally occurring fatty substance in the skin called ceramide. Others believe it's (2) an abnormal or missing protein which causes the skin barrier to be compromised, allowing allergens and irritants to cause immune responses more easily, triggering the itch/chronic inflammation (this might explain the response seen with topical steroids).

TLDR: The pathogenesis of eczema is multifactorial, but broadly follows a process of genetic (or epigenetic, in the case of the early gut microbiome) dysregulation relating to barrier integrity proteins like filaggrin with corresponding changes in the skin microenvironment's ceramide content. Following these changes in protein structure and function and lipid quantity, the compromised barrier is predisposed to irritation and infection, which leads to an abnormal immunological response as Th2 cells work to resolve inflammatory processes in the skin (it's not clear how B cells participate in the pathogenesis of eczema at this time).

Treatment options for mild-moderate eczema are generally limited to topical corticosteroids and moisturizing ointments, as well as topical immunomodulators. For more severe disease, patients can pursue phototherapy, oral (and other systemic) immunosuppressants, or, recently, the mAb dupilumab, which targets the Th2-regulated cytokines IL-4 and IL-13. Considering this mAb's efficacy, you might regard eczema as an autoimmune disease with non-immunological predisposing factors.

Generally speaking, all of the mechanisms you've described participate in the pathogenesis of eczema. As mentioned, atopic dermatitis (eczema) is not completely understood, but a number of factors have been identified as potential targets for clinical interventions. It remains unclear whether eczema is initiated at the skin barrier ("outside-in") or by the immune system ("inside-out"), as quality evidence supports either hypothesis, but the actual etiology of eczema is likely a complex interplay between extrinsic and intrinsic physiological elements. Collectively, these factors culminate to produce chronic pruritic (itchy) skin inflammation, particularly on flexor surfaces ("creases" between joints).

Ceramide is an interesting subject in the context of eczema. There are 12 ceramide subspecies, the quantities of which are important for the organization of the epidermal barrier. We know that the epidermal barrier is compromised in eczema, and we know that relative ceramide concentrations are different on eczema patients' skin compared to healthy controls, so we say that there is an association between altered ceramide production and eczema, although we're not certain that this 'deficiency' of ceramide is the actual cause of eczema [1].

Ceramides are a family of waxy lipid molecules, so exactly which chemical is produced?

From [1]: The lipid bilayers of the stratum corneum consist predominantly of three different lipids: ceramides, cholesterol, and free fatty acids. The ceramides are further divided into 12 subspecies (ceramides 1–12), and are thought to be critical in the organization of the lipid bilayer. The synthesis of the lipids takes place in the stratum granulosum, from where the lipids are delivered to the stratum corneum. The lipids surround the corneocytes, which are flat nucleus‐free cells built of keratin filaments and surrounded by cross‐linked proteins called the cornified envelope.

Is it because the skin produces another kind of ceramide which has lower quality, or it does not produce enough?

From [1]: Comparisons of SC ceramides in healthy skin and atopic dermatitis skin were made by different groups in the 1990s, and showed lower levels of ceramides 1 and 3, as well as a lower ceramide/cholesterol ratio, for non‐lesional atopic skin.

The "key players" in skin barrier integrity are lipids (like ceramide) and proteins (which are regulated by gene expression). Because of this known relationship, it was long-hypothesized that there was some genetic dysregulation contributing to the compromised barrier integrity in eczema, which was supported by twin studies showing that eczema was highly heritable. In 2006, mutations in the gene encoding filaggrin (FLG) were identified as a primary predisposing factor for eczema [2,3].

What protein it is?

From [2]: Filaggrin is a key protein that facilitates terminal differentiation of the epidermis and formation of the skin barrier.

As it relates to ceramide, from [1]: ...one research group studied atopic dermatitis skin, excluding patients with filaggrin mutations to ensure that the discoveries made were independent of the mutations, and correlated the ceramide composition with the lamellar lipid organization. They found significantly lower levels of ceramide 3 in atopic dermatitis individuals than in healthy controls, as well as a correlation between a low ceramide 3 level and lamellar lipid disorganization, despite the presence of wild‐type filaggrin in both groups.

We can see from these results that both proteins (filaggrin) and lipids (ceramide) are involved in the pathogenesis of eczema, but they don't appear to be significantly related to one another. It's possible that eczema/atopic dermatitis, as we currently understand it, can actually be broken up into many subphenotypes that have similar presentations (itchy, erythematous skin) but different etiologies, much like cancer and sepsis.

Is that something related to T cells (recognizing antigens) or B cells (producing antibodies)?

As mentioned above, skin cells (not T cells) are responsible for lipid production, and filaggrin "facilitates terminal differentiation of the epidermis" (not lymphocyte development). However, T lymphocytes are involved in eczema, as it is an inflammatory process (which are regulated by these immune cells) [4]. To avoid going down too many rabbit holes, you might familiarize yourself with helper T cells and cytokines before continuing. From [4]: ...a subgroup of patients with atopic dermatitis has a filaggrin loss-of-function mutation. Recently, it was shown that filaggrin expression is reduced in atopic dermatitis even in the absence of any mutation. Keratinocytes differentiated in the presence of IL- 4 and IL-13 exhibited significantly reduced filaggrin gene expression and neutralization of IL-4 and IL-13 improves skin barrier integrity. This indicates that Th-2 lymphocytes directly contribute to the skin barrier defect in atopic dermatitis...Microscopic studies revealed a sparse perivascular T cell infiltrate in unaffected atopic dermatitis skin that is not seen in normal healthy skin.

In terms of B cells, conflicting evidence exists regarding their participation in eczema's pathogenesis. Some patients have shown dramatic improvement in their symptoms when treated with rituximab, an anti-B cell mAb [5], while others have not responded to the medication [6], marking the need for a formal RCT examining rituximab's efficacy in treating eczema and further studies elucidating the role of B cells in the pathogenesis of the disease.

Is it a skin problem or an immune system problem?

This is really asking "is eczema an outside-in or an inside-out problem?" The answer, as I'm sure you've already realized, is: it's more complicated than that. The "problem" of eczema arises from disrupted skin permeability, which can be both caused and worsened by a variety of intrinsic and extrinsic factors [7]: 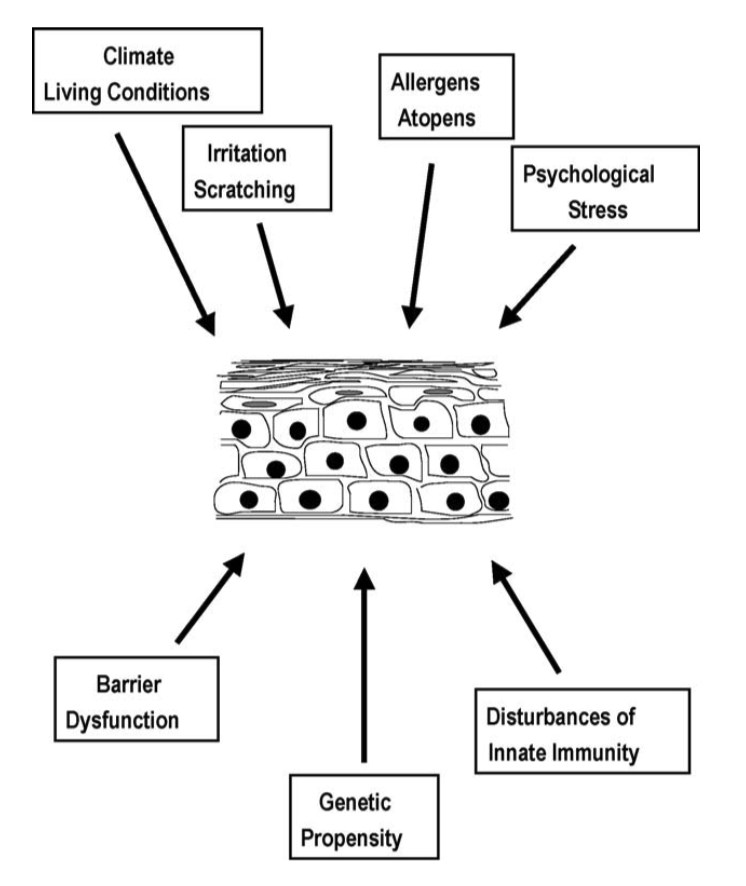 It's true that studies have shown an association between reduced gut microbial diversity in early life and eczema, but best evidence doesn't support that the gut microbiome plays a definitively causative part in the pathogenesis of the disease [8].

From [8]: Culture-based studies have shown strong associations between cutaneous Staphylococcus aureus colonisation and established atopic eczema during and outside of the context of disease flares. Using the same approach, there is also evidence for an inverse relationship between gut bacterial diversity in early life and the later development of atopic eczema, in keeping with the ‘biodiversity hypothesis’...both Staphylococcus aureus and epidermidis proliferate whilst bacterial diversity drops at lesional sites when atopic eczema flares, but S. aureus elimination is not the main reason why atopic eczema gets better...studies have not found evidence that S. aureus colonisation triggers atopic eczema development...

Because eczema is an inflammatory disorder, the immune system is an inherent participant in its initiation and resolution. Recent research has identified Th2 cells as important players in the pathogenesis of eczema [9]. From [9]: Early models of aetiology attributed symptoms of [eczema] to cutaneous inflammation at lesion sites, but recent studies have established that activated immune mediators in the circulation drive disease severity. Activation of T helper 2 (Th2) and Th22 cells in the circulation appears to be the principal initiator of acute [eczema] pathology, with the emergence of Th1 and Th17/interleukin (IL)‐23 pathway activation marking the transition to a chronic state.

"Healthy food" won't necessarily help, but avoiding food that contains allergens that trigger your eczema outbreaks will. Besides, eating healthier will make you feel better in general. "More probiotics" almost certainly won't help, as clarified by [8]: ...there is further evidence that a reduced diversity of the faecal microbiota precedes the development of atopic eczema, an association that appears lost in established disease. If "established disease" doesn't feature the same reduced diversity in the fecal microbiome as before the development of eczema, then the microbiome in established disease isn't really a therapeutic target.

"Applying moisturizer" probably will help. From [7]: Application of creams and ointments containing lipids and lipid-like substances, hydrocarbons, fatty acids, cholesterol esters and triglycerides stimulates barrier repair and increases stratum corneum hydration...As AD is often accompanied by reduced lipid composition, topical application of lipids and hydrocarbons may partially correct permeability barrier defects. It has been shown that topical treatment with hydrocortisone ointments may lead to rapid improvement in barrier function in atopic skin...several research groups and companies report that creams containing ceramides and a mixture of the three key lipids are not superior to ‘‘classical’’ cream or ointment preparations, such preparations have not yet been widely used. More research is necessary to determine the significance of ceramides and the treatment composition with the most therapeutic benefit.

The pathogenesis of eczema is multifactorial, but broadly follows a process of genetic (or epigenetic, in the case of the early gut microbiome) dysregulation relating to barrier integrity proteins like filaggrin with corresponding changes in the skin microenvironment's ceramide content. Following these changes in protein structure and function and lipid quantity, the compromised barrier is predisposed to irritation and infection, which leads to an abnormal immunological response as Th2 cells work to resolve inflammatory processes in the skin (it's not clear how B cells participate in the pathogenesis of eczema at this time).

Treatment options for mild-moderate eczema are generally limited to topical corticosteroids and moisturizing ointments, as well as topical immunomodulators. For more severe disease, patients can pursue phototherapy, oral (and other systemic) immunosuppressants, or, recently, the mAb dupilumab, which targets the Th2-regulated cytokines IL-4 and IL-13 [10]. Considering this mAb's efficacy, you might regard eczema as an autoimmune disease with non-immunological predisposing factors.

Not the answer you're looking for? Browse other questions tagged dermatology immune-system digestion eczema or ask your own question.

11
Is constantly using oily moisturizer bad for your skin?