Recently I have developed a purely white finger nail, my right middle to be exact. It's the only one that's white while the others are foggy clear like normal. My mom says it's calcium deficiency but I'm still curious. What do I have and how can I fix it? Thanks! 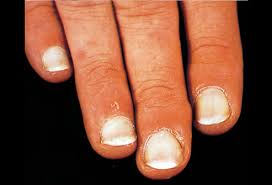 If the picture above describes your question, then the condition is called leukonychia. Skin diseases such as psoriasis and vitiligo can cause white spots on your nails. The skin around your nails also whitens in response to vitiligo; your nails might be deformed and pitted in the case of psoriasis.

Chronic kidney or liver disease can also manifest itself through your nails. Patients with severe cirrhosis or renal failure might notice the bottom half of their nails turn white, while the upper areas remain pink-to-clear.

The most common cause is injury to the base of the nail (the matrix) where the nail is formed.

It is harmless and most commonly caused by minor injuries, such as nail biting, that occur while the nail is growing. Leukonychia occurs most commonly in healthy individuals, unrelated to any known nutritional or physiological deficiency. When caused by injury the marks will disappear as the nail grows outwards, however a dietary deficiency will cause recurrent leukonychia.

And as to what your mom said, it is slightly correct, certain deficiencies could cause this problem of nail color. Such as

but not calcium deficiency. It is simply a myth.

Whatever the cause, white spots on fingernails are temporary and will grow out as your nails grow. However, it can take more than eight months for nails to grow out completely so the spots may be around for a while.

Not the answer you're looking for? Browse other questions tagged coloration-discoloration fingers nails or ask your own question.

0
Is it normal for a bruise under a fingernail to move towards the end of the finger as the nail grows?