As a component of the Myofascial Trigger Point Pain Syndrome vicious cycle, sensitization of nociceptive nerve fibers leads to excessive acetylcholine release from nerve terminals, entailing sarcomere contraction by means of sustained depolarization of the postjunctional membrane. The entire syndrome loop is sketched below, as extracted from Simmons et al. (1999): 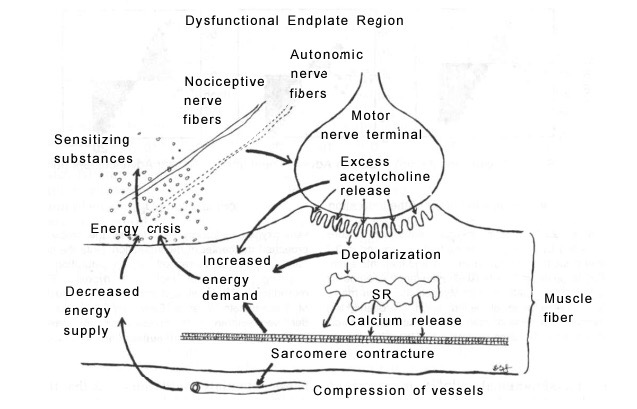 What benefit is the organism trying to reap by releasing ACh when nociceptors are sensitized? Does muscle contracture protects fibers from painful situations such as tearing?

Background
Physiologically spoken, acetylcholine (Ach) is released in the neuromuscular junction by the motorneuron to activate muscle fibers to contract through nicotinic acetylcholine receptors in the postsynaptic membrane.

Jafri (2010) outlines a hypothesis why Ach responses are increased, leading to the development of trigger points*, based on the work of Simons (2004):

A hypothetical basis for trigger points, according to Jafri is as follows:

The ischemia/hypoxia leads to acidification and muscle injury, in turn releasing of potassium, bradykinins, cytokines, ATP, and substance P which might stimulate nociceptors in the muscle, in turn leading to the tenderness and pain observed with trigger points. Pain is mediated by depolarization of nociceptive neurons that in turn also release of calcitonin gene-related peptide (CGRP). CGRP inhibits acetylcholine esterase and upregulates the amount of acetylcholine receptors and release of acetylcholine, known as acetylcholine leakage. The result is increased acetylcholine in the nerve terminal, synaptic cleft, and increased motor endplate potentials resulting in more contraction (Jafri, 2010).

Why is CGRP released? From what I know, the function of CGRP is largely unknown (Russell et al., 2014). Its role in migraine has attracted attention, but in trigger point therapy world, it's not really elucidated as far as I can see. Moreover, Trigger Points are an established phenomenon in treatment world (physiotherapy, massage, etc), but scientifically their pathophysiology is based on speculations and hypotheses (educated guesses). However, tapping into CGRPs expected role in pain responses in general, I think it's safe to say that CGRP is a part of a common inflammatory response and neuroprotective agent, and quoting Russel et al (2014):

The regulation of CGRP synthesis is still poorly understood. CGRP synthesis is known to be upregulated in models of nerve damage, such as peripheral axotomy, and it is thought that synthesis of the peptide is enhanced in tissues that are undergoing an inflammatory response []. This may be linked to local release of nerve growth factor (NGF) from cells such as macrophages and keratinocytes. NGF is vitally important for the growth of sensory nerves and for the maintenance of function of mature nerves

Not the answer you're looking for? Browse other questions tagged benefits neuroscience neurotransmitter myofascial-pain-syndrome referred-pain or ask your own question.

1
Why are taste and smell (and hearing a song from the 90's) such potent triggers for nostolgia? Benefits and Negatives of nostologia?
2
Is it safe and beneficial to eat poached and cut fish bones?
1
Sensitization and Energy Crisis in Myofascial Pain Syndrome
1
Sensitization and Ischaemia
5
What is the difference between stress and excitement?
3
Correlation between carbonated drinks and IQ