What is a T2 hyperintense focus in the subcortical white matter?

There are a few terms to define here, and I'll go through them one by one:

This has to do with the type of scan. MRI's are pretty complicated technologically, but the basic idea is that body tissues are full of water, and water molecules respond to magnets. If you turn on a really powerful magnet near body tissues, the water molecules in the tissues will align with the magnetic field. Turn off the magnet and pulse a radio signal, and you'll shake the molecules back into a random alignment and they'll shoot back a radio signal as they move. This is called magnetic resonance.

If you can detect all the little radio signals coming back from all the molecules and figure out where they all came from, you can map out where all the water molecules are, which tells you where the tissues are. Do it precisely enough, and you can make a high-quality image of whatever tissue you're scanning. This is magnetic resonance imaging, or MRI.

There are a few variables you can tinker with to tune the image to what you're looking for, most notably repetition time (TR), how long you wait between each pulse, and time to echo (TE), how long between the radio pulse being sent and the echo being captured. If you set the machine to wait a very short time between pulses (short TR), and a very short time between sending each radio pulse and capturing its result (short TE), you're going to get what's called a T1-weighted image. Much longer TR and TE produce a different image, called a T2-weighted image. Even longer, and you get a FLAIR image.

These are just names for the different types of scans you can get by playing with TR and TE, but the rationale for what makes an image T1- or T2- weighted is based on properties of the water molecules themselves, literally quantum physics. You're welcome to look them up though if you like, and get a really good understanding of exactly what makes the image look that way.

Intensity on an MRI refers to the brightness of a given spot. But because doctors are doctors, instead of calling it a spot, they refer to a given location on the MRI as a "focus." This term tends to be reserved for when something special is going on there.

Your brain is divided into two basic types of material, white matter and gray matter.

Broadly speaking, the gray matter forms the outermost surface of the brain, the cerebral cortex, which is in charge of most of the actual thinking that takes place in your brain, like getting input from your senses, sending output to your muscles, and connecting the two with, well, your consciousness and most human mental abilities.

White matter on the other hand is like all of the wires that connect the gray matter together, and sits below the surface of the brain.

The cerebrum, the largest part of the brain, is divided into four lobes from back to front and bottom to top: the occipital lobe, the parietal lobe, the temporal lobe and the frontal lobe. If you only look at the gyri, or outer folds of the brain, you end up with the colored areas below: 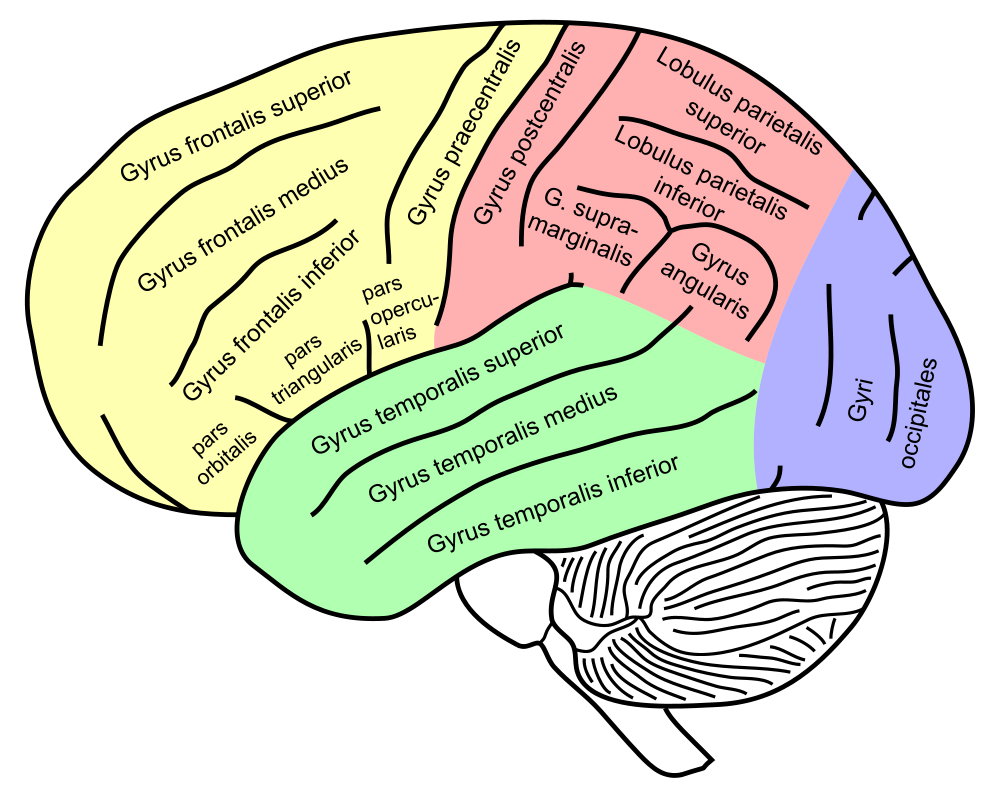 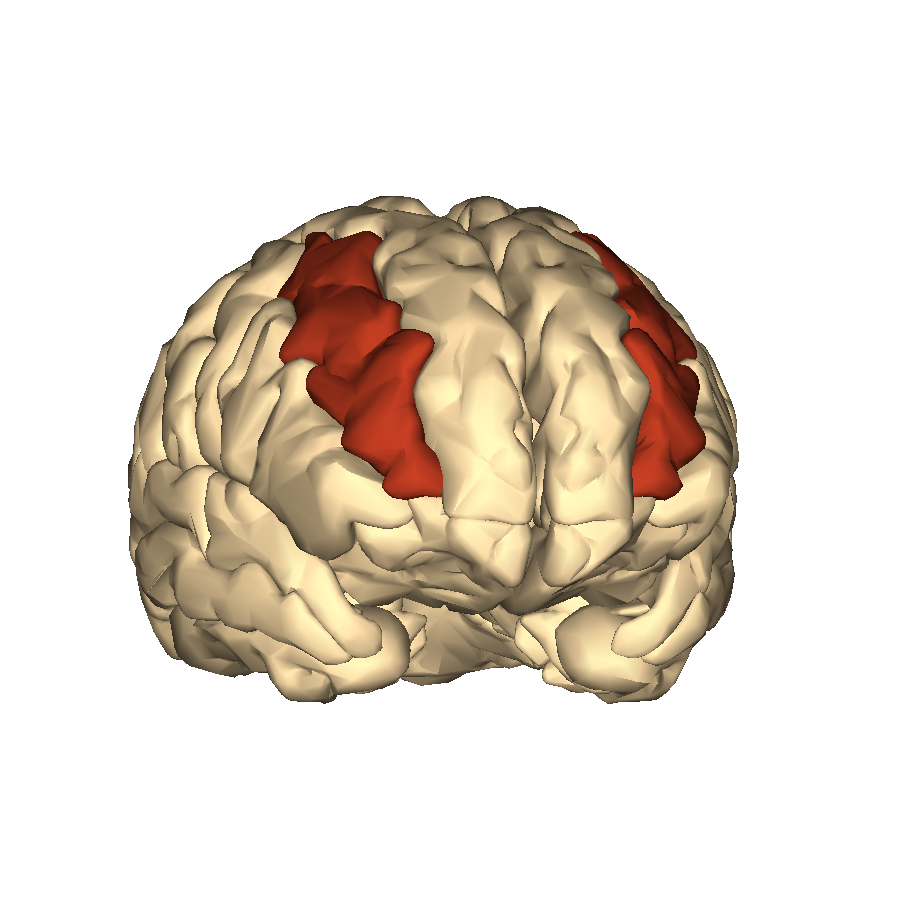 This is the brain of a guy facing you from the front, looking slightly to your right. The part of his brain you're seeing would be just under the forehead. The red sections are the left and right middle frontal gyri. Remember that these parts are labeled from the perspective of the guy whose brain it is, and not from the perspective of the observer. So the red spot to the left is his right middle frontal gyrus.

Finally, what is a T2 hyperintense focus in the subcortical white matter of the right middle frontal gyrus?

The T2 tells you that the image was made using a T2-weighted MRI scan. The hyperintense focus is a bright spot, likely caused by higher than expected water content. Remember that bright doesn't mean "compared to the rest of the scan," it means "compared to how that area is supposed to look." The subcortical white matter is just the white matter directly below the cerebral cortex, the outer layer of the brain. The right middle frontal gyrus is the left red section in the image above.

So all in all, it's a brighter than expected spot in the layer of white matter just below the outer surface of the brain, in the red section to the left above.

Not the answer you're looking for? Browse other questions tagged terminology mri white-matter or ask your own question.

6
What is the word for the dead skin on the upper layer of a healed wound?
2
What is the meaning of "trial treatment"?
9
How much of the difference in brain size is attributable to gender, not physical size?
1
Reading radiology reports: What do two numbers separated by a slash mean?
4
Does diffusion MRI (DWI & DTI) measure diffusion or osmosis?
2
What is the medical meaning of "course"?
0
"Focal tear of the [ligament name]" vs. "Tear of the [ligament name]"